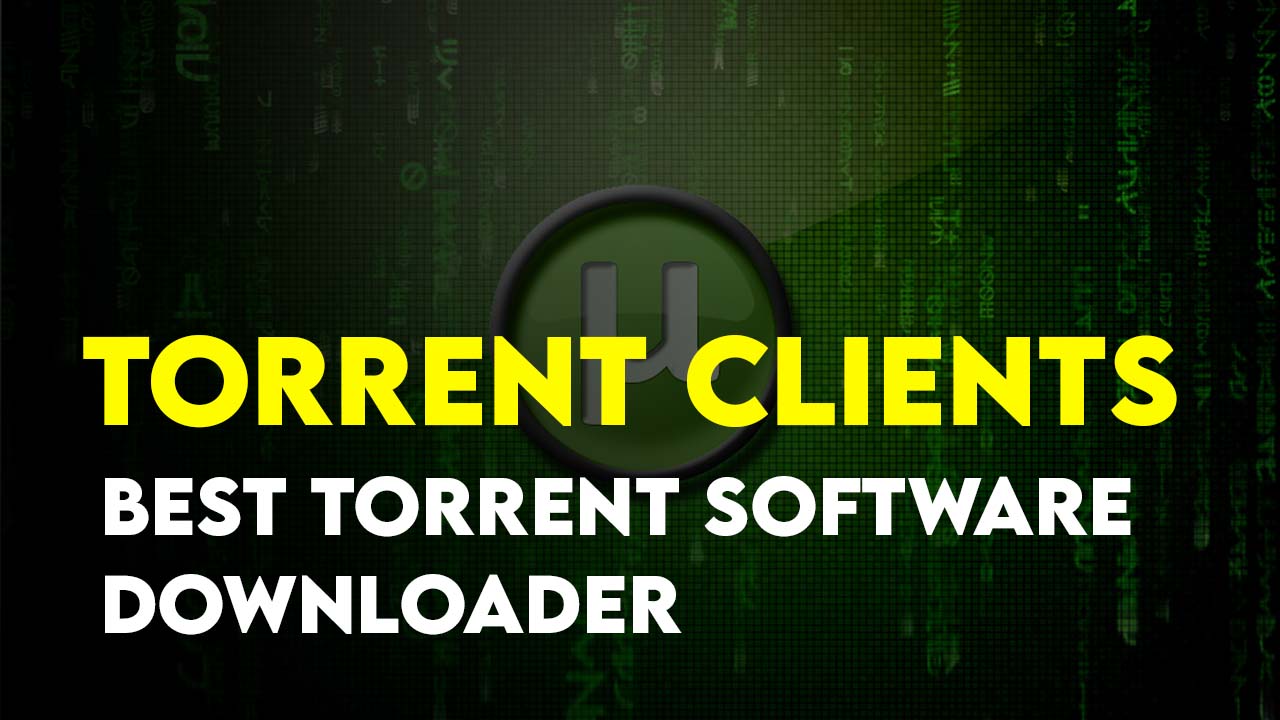 If you search online, you’ll find a lot of Torrent software Downloader aka Torrent Clients applications. Sometimes the users get confused to download which Torrent Software Downloader. Well, before going any further, let me tell you that each torrent client application has its advantages and set of tools that have its usage. And to use that you must configure a specific setting. Anyway, in this article, I will introduce you to the Top 5 Best Torrent software Downloader AKA Torrent Clients apps. With the help of these tools, you will no longer have to search across the web for other software. Among the software in this list, a variety of services can be seen from simple easy-to-use clients to complex services with the ability to expand functionality using plugins.

qBittorrent software is an excellent choice with remarkable simplicity and speed. This software is available for Windows, Mac, and Linux operating systems. One of its strengths is that it does not display ads or add-on tools, and does not require additional software. Many sources consider qBittorrent to be the best free torrent client. Its only weakness is the low number of plugins compared to other software.

Some torrent download software offers perfect performance. Others have been developed with a focus on simplicity. qBittorrent is in the middle of this range, which was developed to meet the needs of users and minimal pressure on the processor and RAM. qBittorrent’s features include an integrated torrent search engine, media content player, encryption, prioritizing torrents and files in the torrent, IP filter, and torrent creation. qBittorrent can be considered the most similar open-source software to uTorrent, which works without additional software.

In the end, if you are looking for torrent software compatible with multiple platforms that will solve your basic needs in the fascinating world of torrenting and not too complicated, qBittorrent will be the best choice.

If you don’t mind seeing ads, Vuse is a professional choice with the many features it offers. This torrent software, which is published only for Windows, has a clean and beautiful user interface. Its capabilities can be increased by installing plugins. The only downsides are the display of ads and the installation of an additional trial antivirus.

Formerly known as Azureus, Vuse software claims to be “the most powerful BitTorrent software in the world”. However, even though it is impossible to draw accurate conclusions from the content and marketing claims, many experts consider Vuse’s capabilities to be excellent and complete.

Vuse comes in two versions, Vuze Leap with basic features and Vuse Plus with a set of professional features. Both versions allow the user to download torrents and have additional options such as a media content player and magnet file link support. The Vuse Plus add-on comes as an integrated antivirus and also can preview media files.

One of Vuse’s main competitive advantages is its user interface, which provides easy access to the most professional features even for newbie users. Vuse provides users with bandwidth limiting, IP filtering, and countless other features of professional torrent software. Finally, it can be considered as one of the best choices for the professional use of torrents.

Deluge torrent software offers many customization features and can be set to be very simple or very professional. This software is available for Windows, Mac, and Linux operating systems, which is one of its important advantages. Also, adding new features using plugins and fully coordinating with browsers are among Deluge’s competitive advantages. The only weak point of the mentioned software is the very simple and empty initial user interface.

The Deluge client is one of the most flexible options on the market, offering simplicity and power to the user. The numerous plugins that have been developed for this software make it possible to change all the parts and somehow make a completely personal software. You can easily create a uTorrent-like client that does not require additional software. Downloading according to alphabets, moving files depending on the format to special folders, adjusting the speed according to network limitations, attractive graphs, scheduling activities, and coordinating with Firefox and Chrome, all are possible with the help of many Deluge plugins.

If you are looking for lightweight and complete software that also supports BitTorrent, uTorrent will be the best option. Various features such as scheduling downloads have made uTorrent one of the most popular software. The mentioned client, which is available for Windows, Mac, and Android with a very low volume, is not accepted by some torrent users due to the display of advertisements and the installation of additional software.

uTorrent, also known as µTorrent, has been available to torrenting enthusiasts since 2005 and is known as the most widely used software outside of China. Of course, in recent years, we have seen an increase in criticism of uTorrent, which has reduced its market share compared to its competitors. In the advertising and additional software section, there are many criticisms of the mentioned service. Finally, if you intend to use uTorrent, during the installation process, be careful about offering additional software and deselect any that are not required.

Despite all the challenges and criticisms, uTorrent is considered a very useful tool that does not put too much pressure on system resources. The entire application is less than a digital photo. Although uTorrent is not an official BitTorrent application, the same team has been responsible for maintaining and developing the application for the past decade. Finally, we must say that uTorrent has a history of challenges and security crises. One of the most recent problems is the discovery of a security hole in the software that allowed cybercriminals to access key functions and view the user’s download activity. Of course, the developers provided a security package to fix the problem.

The official BitTorrent client provides users with various features such as web-based seed distribution and commenting. The configuration of the mentioned software, which is available for Windows, Mac, and Android, will be very simple and the schedule of downloads will be possible with it. BitTorrent has a very low volume and its only weakness is the display of advertisements.

You might be wondering why BitTorrent should release an official client despite the support and development of uTorrent. In addition, BitTorrent is considered a redesigned version of uTorrent, and its release may not have any logical justification. However, although the two mentioned applications have similar functionality, we can find several differences between them that we mentioned above. Additionally, many torrent trackers prefer BitTorrent over other services. Finally, BitTorrent can be considered an option with a simple user interface and suitable features, which will be attractive, especially for novice users of the torrent world.

You can use any of these Torrent software Downloader aka torrent clients to download files, courses, etc. In the end, if you are looking at whether using torrents is legal or not, you must read what is Torrent and whether is it safe to use.

What is torrent and is it legal to do Torrenting across the web? Previous post
Top 10 Best Planning Apps for Android and iOS in 2023 | Complete to do list Next post