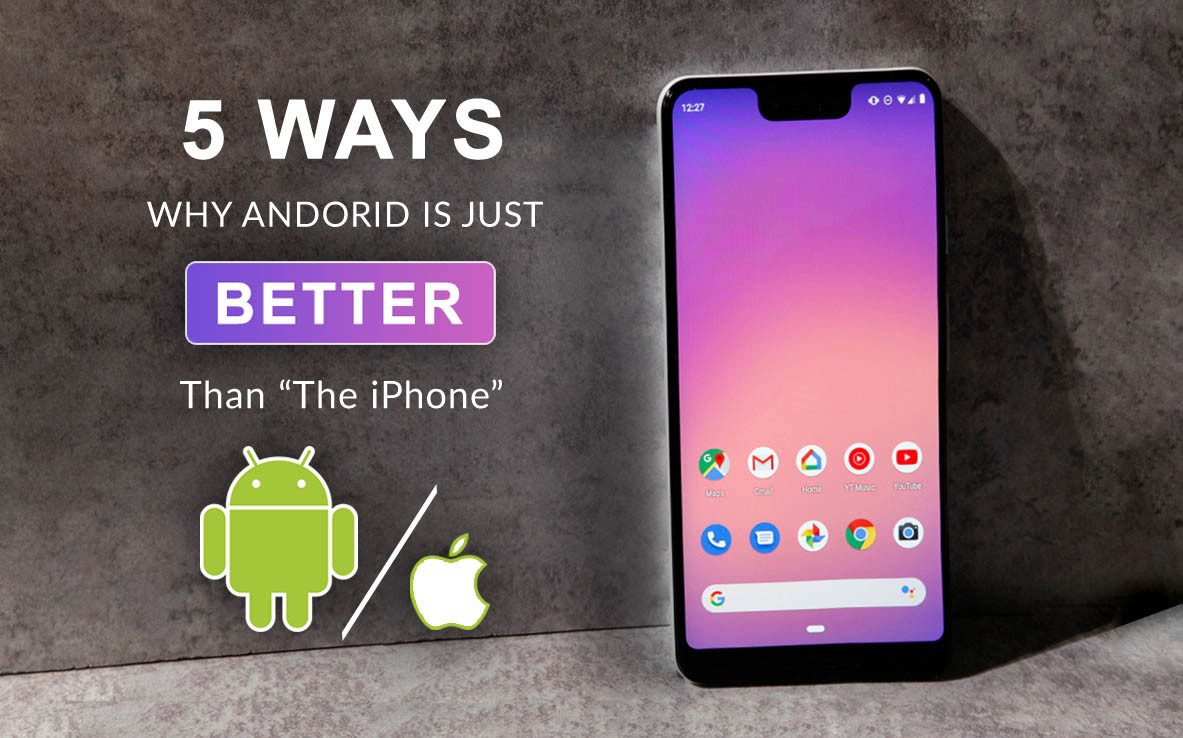 In this article, I will explain to you ” The 5 ways Android is just better than iPhone”. I know that iPhone may last longer than the Android devices but there are lots of features and hidden things that the iPhone doesn’t have but Android has. Some features are good in Android devices and some features are good in iPhones but you can’t tell which one is better. Now let’s see why you should choose one of them instead of the others. So without further to do here are “5 ways Android is just better than iPhone”.

To be honest we have to give this point to the Android devices. There is no way an iPhone could take a better quality photo than Android. Android developers are obsessed with the cameras that they pretty much work on camera quality and pixels. If we compare a photo taken from the iPhone vs a photo taken from an Android device, I am pretty sure that Android would win. For example, compare iPhone x’s camera quality vs Google Pixel 3. We can obviously say that in Google Pixel 3, the camera app has way better features than iPhone – “like, The super slow-motion video and 4k video recording, let’s be real, who can do that – “super slow motion video with HD recording plus 280 FPS” that is insane. This is why “the camera is the first one out of 5 ways Android is just better than iPhone”.

Surely, we can all agree on the market prices. Whenever Apple launches an iPhone people just stand in front of the shop to buy the new iPhone and because of it, Apple has been popular around the world – So popular that Apple has increased their iPhone’s prices – “up to 30%”. Before the values were $ 700 up to $ 1000 but now the new iPhones “iPhones xs max’s price is from $ 1 700 up to $2 100, I mean that is just out of limit but still, there are peoples that would buy it. If we compare one of the iPhones vs Android – for example, iPhone xs vs Google pixel 2. iPhone xs’ price is $1 300 but Google Pixel 2 is $950 that is a huge gap between the prices.

Back in the days when there was no iPhone x and 8, we were able to use other headphones for the iPhones but now Apple has created new headphones for the new iPhones, that means if you lose your headphone, you have to buy a new headphone – “that costs $ 45”. Apple is just making money out of nothing, why can’t we just use the other headphones. In Android devices, you can use any headphones that you want you can even use Apple’s headphones. Headphones are a bigger issue for iPhone users since they the new headphone came out with iPhone 8, We can’t listen to music while charging our iPhone because there is only one place to for both charger and headphone to fit in.

Apple’s operating system sucks because it lacks a lot and it is full of shitty things. You can’t access the system’s file, you can’t download something from the browser, I mean like you don’t have the freedom to do anything in iOS devices. If you forget your iPhone’s passcode and your iCloud’s passcode then you have to through away your iPhone because you won’t be able to unlock it again. Talking about the security, it is a bit secure but whenever you download a third-party application or you jailbreak your iOS device, your iPhone will be so unprotective, it won’t be able to handle a bit of the virus and in the other hand Android devices can handle up to thousands of viruses at the same time. You have the freedom to do anything in the Android devices, You can even download windows on your Android devices.

If that doesn’t influence you enough to buy an Android I mean nothing else would impress you.

That is the 5 Ways Android is just better than iPhone, those are the 5 things I would come up with through my experience, information, and research. If you think any of it is wrong, feel free to leave a command.

Now you know the 5 ways Android is just better than iPhone. Hope you guys have gotten something from this article. I will try my best to find out as many goods articles as you want. In addition, if you have any problem, suggestion or request you can say, just by commenting in the comment section. Thanks for being with us and do not forget to subscribe and also, visit our website every day, because we post new articles every day.